I love Phineas and Ferb. It’s my favorite television show of all time. I can watch a show from the first season in 2008 and still be able to sing along with all of the songs as if it had just aired for the first time. I have been watching the “Last Days of Summer” marathon on Disney X D for nearly four days in advance of tonight’s series finale. Such an extensive binge session not only makes one nostalgic for the magic of a simpler time, but also affords the viewer an opportunity to pick up on what made the show so special to begin with.

Being who I am, I instinctively began to analyze the characters and themes of Disney Channel’s longest-running series. Thus, I present to you this list of five virtues that the show teaches. It would be prudent for anybody, especially young conservatives who are bogged down by the bleak and negative world-view which is peddled by the traditional conservative media, to adopt these traits as well. Just saying… 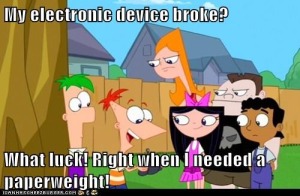 Like what you read? Want to give the author a piece of your mind? Feel free to leave a comment, but please, keep it clean. -EC Cancel reply